Unrest, inflation and an aging populace stand in the way of the Middle Kingdom’s touted domination

When exactly will China take over the world?

The moment of truth seems to be coming closer by the minute. China will become the world’s largest economy by 2050, according to HSBC. No, it’s 2040, say analysts at Deutsche Bank. Try 2030, the World Bank tells us. Goldman Sachs points to 2020 as the year of reckoning, and the IMF declared several weeks ago that China’s economy will push past America’s in 2016. There’s probably someone out there who thinks China became the world’s largest economy five years ago. 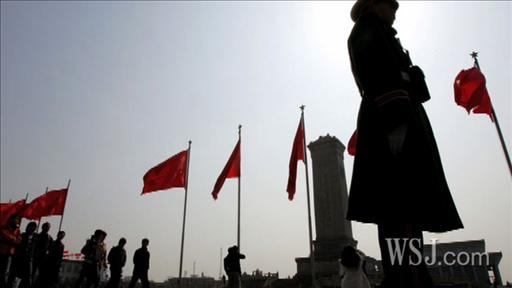 In an interview with WSJ’s John Bussey, Eurasia Group President Ian Bremmer insists that for China to become the economic powerhouse it is predicted to become in this century, the Chinese must fundamentally restructure their economy.

But let’s not get carried away. There’s a good deal of turmoil simmering beneath the surface of China’s miracle. Consider these recent snapshots:

• In Hunan, farmers pushed off their land by aggressive property developers discover that local authorities are not on their side. A farmer sets himself on fire, and protests spread quickly from town to town.

• A chemical spill into a Chinese river cuts off water supplies to Harbin, a city of four million people, sparking public fury.

• In Inner Mongolia, a Han Chinese truck driver kills a local herdsman in a hit-and-run accident, and ethnic unrest flares for days.

• Rioting in Xinjiang province spins out of control, forcing a state Internet shutdown across an area three times the size of California.

• In the coastal city of Xintang, security guards sent to break up a protest by migrant workers push a pregnant woman to the ground, igniting a firestorm that only paramilitary forces in armored personnel carriers can handle.

Reuters A boy rides a cart carrying his grandparents outside Beijing. As more Chinese reach retirement age, the need to provide pensions and health care will lead to unprecedented costs. 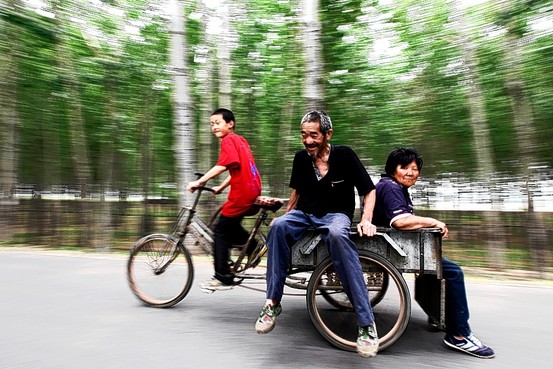 China’s security services are the world’s best at containing large-scale riots, and these protests do not represent any form of coherent opposition to Communist Party control. Most of the protests are directed at local officials and are fueled by local grievances, and three decades of double-digit growth has earned the Chinese leadership deep reserves of public patience.

But this is a country that measures its annual supply of large-scale protests in the tens of thousands. For 2006, China’s Academy of Social Sciences reported the eruption of about 60,000 “mass group incidents,” an official euphemism for demonstrations of public anger involving at least 50 people. In 2007, the number jumped to 80,000. Though such figures are no longer published, a leak put the number for 2008 at 127,000. Today, it is almost certainly higher.

There is certainly no credible evidence that China is on the brink of an unforeseen crisis, but all that public anger points to enormous challenges on the road ahead. Emerging powers like India, Brazil and Turkey can continue to grow for the next 10 years with the same basic formula that sparked growth over the past 10. China, on the other hand, must undertake enormously complex and ambitious reforms to continue its drive to become a modern power, and the country’s leadership knows it.

The financial crisis made clear that China’s dependence for growth on the purchasing power of consumers in America, Europe and Japan creates a dangerous vulnerability. Those who insist that it’s possible to map the precise arc of China’s rise seem to assume that China’s leaders can steadily shift the country’s growth model toward greater domestic consumption, by transferring enormous reserves of wealth from China’s powerful state-owned companies to hundreds of millions of new consumers.

That’s quite an assumption. Despite the best efforts of policy architects in Beijing, the share of household consumption in China’s economic growth last year actually moved in the other direction, in part because there are political powerbrokers within the elite who have made too much money from the old model to fully embrace a new one.

Getty Images Overturned police cars line the street after a riot in Xintang in June. China has tens of thousands of large-scale protests a year. 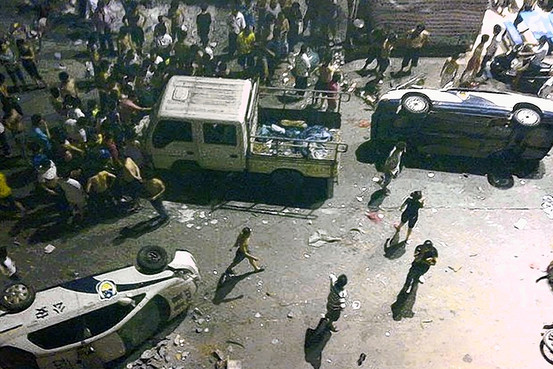 Moreover, as the gap between rich and poor continues to widen, social unrest will almost certainly force tighter state restrictions on free expression and free assembly. That could promote a violent backlash if rising expectations for material success aren’t met. Most dangerous of all for the ruling party’s future, factions within the government might not agree on how the state should respond to a sudden convulsion of organized unrest.

China’s demographics will provide another serious challenge. The country’s labor force is becoming more expensive as China urbanizes and moves up the value chain for manufacturing. The population is also getting older, as the one-child policy and other factors leave fewer young people to join the labor force. As more Chinese reach retirement age, the need to expand and reinforce a formal social safety net to provide pensions and health care for hundreds of millions of people will add unprecedented costs.

Given that so much of China’s growth is still coming from infrastructure projects and other state-directed investments, the impact on an already overtaxed environment could shock the system. Land degradation, air quality and water shortages are urgent and growing problems. China’s capacity to tolerate a deteriorating environment is higher than in most developing markets (to say nothing of the developed world), but the chances for an environmental incident to provoke a dangerously destabilizing event are growing by the day.

Then there’s inflation, which hit a 34-month high in May, according to China’s National Bureau of Statistics. Food prices surged 11.7%. An over-expansionary monetary policy, higher transportation costs related to urbanization, and large-scale wage hikes are just a few of the variables that ensure the government will have a harder time containing inflation in the years ahead.

Finally, as popular demand, expressed online and in China’s blogosphere, plays a larger role in how Chinese policy-makers make decisions, unhappy citizens will check the state’s ability to implement strategic policies. That, too, could limit China’s longer-term economic growth.

Even if China’s leadership makes major progress on domestic reform, it will find that the international environment is becoming less conducive to easy economic expansion. Higher prices for the oil, gas, metals and minerals that China needs to power its economy will weigh on growth. The exertions of all those other emerging market players will add to the upward pressure on food and other commodity prices, suppressing growth rates and undermining consumer confidence, which have been the most important sources of social and political stability in China.

What about China’s relationship with the United States? Strong growth in China, coupled with America’s unsustainable fiscal policies, high unemployment and weakened consumer demand, will generate friction between the world’s two largest economies—in particular, by significantly increasing the likelihood of protectionism on both sides. That’s a problem for American companies looking for access to Chinese consumers, but it’s far more troublesome for the Chinese, who rely more on U.S. fiscal stability, investment, technology and consumption.

If nothing else, the colossal challenges that lie ahead for China provide an abundance of good reasons to doubt long-term projections of the country’s economic supremacy and global dominance. As Yogi Berra once said, “It’s tough to make predictions, especially about the future.”

—Mr. Bremmer is the president of Eurasia Group, a consulting firm that specializes in political risk assessment. His most recent book is “The End of the Free Market.”

This entry was posted in News. Bookmark the permalink.