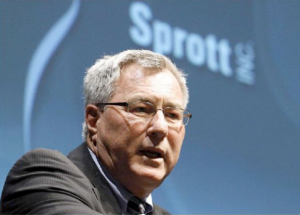 Eric Sprott, the Canadian money manager who in 2008 predicted banking stocks would collapse, says U.S. savers will eventually pull their money out of banks that are carrying too much leverage on their balance sheets.

Banks are leveraged 20 to one and their portfolios are mainly composed of government bonds and mortgages, the founder of Sprott Asset Management Inc., said Friday at the SALT, or SkyBridge Alternatives, conference here.

“House prices keep going down, the number of people under water keeps getting worse,” said Sprott, 66, who is chief executive officer of the Toronto-based firm.

“That leverage is going to work massively against anybody whose lender is in that area. The dominoes are starting to fall.”

Sprott said the “ultimate event” is that savers will take their money out of banks and invest in precious metals such as gold, which he says is now the world’s reserve currency.

Sprott, who earlier this month predicted gold may climb to $2,000 US an ounce before year’s end, said he started buying the metal in 2000.

“If you’re in Ireland today, you don’t have any money in banks, particularly if you’re non-Irish,” he said.

“If you’re in Greece, you’re taking your money out. In Portugal, you probably have concerns. If you have a fear of the banking system, you go to things like gold.”

Sprott, whose hedge funds and mutual funds mostly invest in energy and metals, said silver was recently “manipulated down” after it fell $6 US in 13 minutes on a Sunday evening when trading was light.